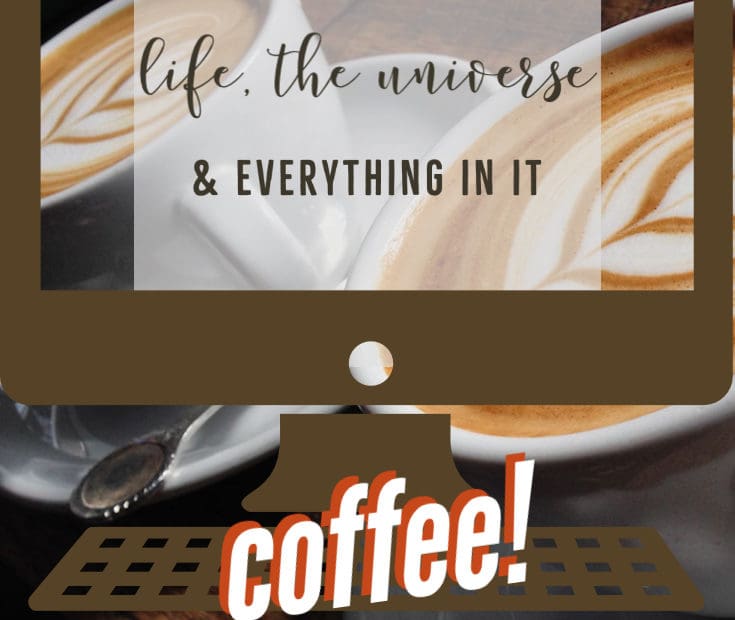 In Hitchhikers Guide to the Galaxy, Deep Thought, the most advanced computer in the universe, concluded that the answer to life, the universe, and everything in it was 42. It’s the questions, deep thought said, that’s really tricky.

Well, in the Essence of Coffee’s Guide to life the universe, and everything in it, the solution to every problem can be found whilst sipping on a great cup of specialty coffee.

Good morning. This is Michael the Aussie Coffee Guy from Essence of Coffee and this Monday Morning Musing is about coffee and creativity.

In my personal history, I’ve done a lot of things and one of them was what we call in Australia, a brickie. A brickie is a person who builds houses using bricks – I believe they’re called masons here. My mate Graeme and I worked on one-off unique house designs. Basically, a client would ask an architect to design a house, not like other houses. That meant we had to work out how to bring to life in the real world what the architect had created on paper.

When we couldn’t quite figure out how to make it happen, we had a standard saying: “Tools down. Let’s grab a coffee and figure this out!”

Inevitably, sitting on a pile of bricks or in a nearby coffee house, coffee in hand creativity would arise and an ingenious solution would appear. Often it involved the invention of a new tool to make the task doable.

Whether it’s a mindbogglingly specific problem like finding that missing component in a world-changing project or finding the solution to seven down in a crossword, sometimes it requires a “tools down” moment.

In a 2012 study, the University of Illinois researchers[1] got a bunch of people to be creative and brainstorm in various environments.  The coffeehouse won hands down. Along with coffee, the hustle and bustle of the coffee shop produced the most effective environment for creative outcomes. Go figure – I already knew that.

My first thought when I read this was, my college let me down. All I did was study in the library. Why didn’t I ever get commissioned in college to sit around in a coffee shop drinking coffee and talking all day? Wait a minute, that’s what I do for a living now. Doesn’t get much better than that.

Anyway, in the 15th century, coffee reached the Arab world, and in the 16th century, the first coffee house was opened in Istanbul Turkey. These coffee houses were not just places to get coffee but became places for conversation and learning. In Turkey, they became known as “schools of the wise”.

There you have it. You heard it first, here on News Radio K.O.T.A. – Essence is the Black Hills “School of the wise”. I knew we had a brainy bunch of regulars at Essence.

More than just a gustatory delight, this amazing brew is key to creative solutions. Bach, Beethoven, TS Elliot, Bob Dylan, and JK Rowling all penned much of their work in coffee shops.

If your in-house brainstorming session is not quite happening, if your creativity has dried up, or your coworkers cant help you figure out what the answer to seven down is: then you could bring the team down to Essence for a coffee, maybe lunch, and discuss – even if you don’t get your solution the team will love you.

Or turn your board room into a coffee shop. Call me and set up a corporate coffee account and get our specialty beans delivered to your office.

You can also grab a bunch of our freshly made pastries to help stimulate your creativity. Well, its coffee time for me so I’m heading downtown to Essence of Coffee 908 main st. see you there.